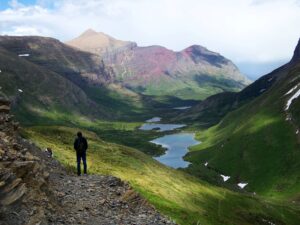 In this first book Man’s Supreme Inheritance, written in 1910, F.M. Alexander argues that we now struggle in all kinds of ways (social, economic, legal, physical, moral, ethical, educational, governmental, and of course personal) because we do not stop and think before we act. (He wrote this book 100 years ago. I wonder what he would be saying if he lived now!)

Alexander observed that we continue to rely on our instinct (the subconscious mind) to guide us, even though instinct can no longer be satisfactory for our present needs.  If humanity is ever to reach its full potential, we must cultivate conscious, reasoning mindfulness so that it dominates the subconscious mind.

Early man evolved slowly and became essentially different from other primates.  He conquered fire.  He developed powers of thought, and was endowed with curiosity and enterprise.   (I have a mental image of man wondering ‘What is over on the other side of those mountains?’ and leaving his home in the rift valley, thus starting his trek to inhabit and finally dominate the world.)

For a long time man was able successfully to rely upon his sense of feeling (his sensory appreciation) in order to meet the demands of survival.  If he sensed, for instance, that winter was coming, or felt that he and his tribe had better move in order to find better hunting grounds, his instincts still served him well.  Thus he survived.

But as man progressed to a stage of more complexity, he established permanent settlements; the start of civilization.  This was a huge shift and it brought with it lots of problems.  As man developed consciousness, reason, and logic, he made changes to his environment that would make his life much more complicated.  His subconscious mind was still dominant, and thus, instinct still ruled.  But as it was no longer reliable, man was at odds with himself. In many ways this is our crises facing us today.

My next blogs will continue this theme.

“Facing a thing that puts you wrong, and dealing with it differently.”  This was what F. M. Alexander said his work was fundamentally all about. Imagine a person who flies

This is a transcript of a speech given by Dorothea Wallis to STAT in the 1950s.  Wallis argues that, “However important the part of conscious thought and control in the

by Stella Weigel In Constructive Conscious Control of the Individual, FM Alexander provides the following illustration: A seven-year-old boy was given an aptitude test designed to measure “control.”  The test